The Difference Between Horizontal vs Vertical Scaling 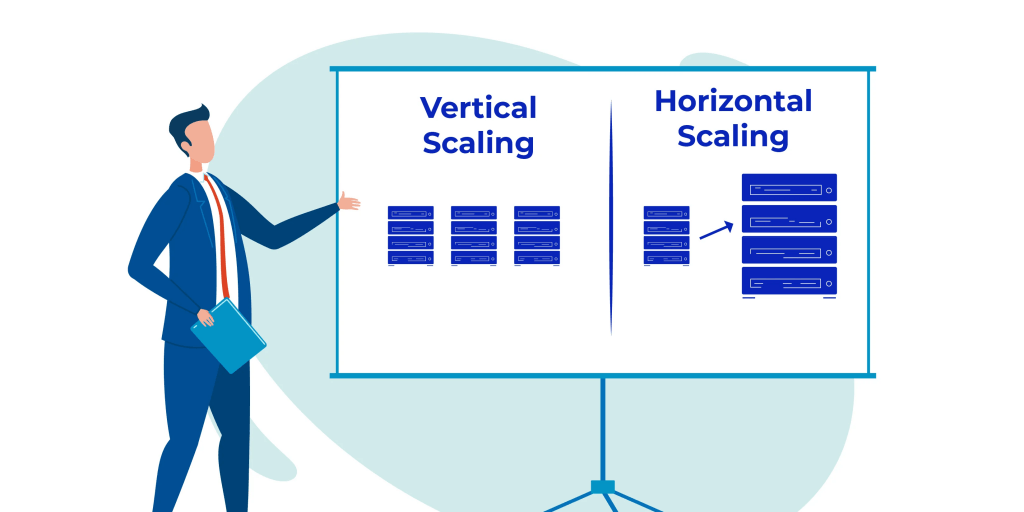 Digitalization is storming away from the world at a precipitate speed. About 3+ Billion people use social media across the globe every day. On average, people spend $9,96,956 on online shopping, while 3,90,030 apps are downloaded from App Store or Google Play Store and all this happens in just 60 seconds.

Those mind-blowing statistics are not just facts but also prove that businesses online are growing at breakneck speed and it is not going to take a dip anytime soon. And if your business website or app is witnessing or rather enjoying the popularity or gaining the demand in the market, it becomes a mandate for you to broaden the horizons of your user accessibility, power, and reach of your online presence.

How do you do it? And which method of scaling will yield the best ROI for you will be the next questions that will pop-in instantly and we’ve got you covered

Scalability is the ability to expand from the existing configuration of the system for handling the increasing amount of load. Scaling can be done by either adding extra hardware or by upgrading the current system configuration. There are two different ways to accomplish scaling, one is vertical scaling, and the other is horizontal scaling.

The core of the difference is the approach of adding resources to the infrastructure. Let’s understand how one is different from another.

What Is Horizontal Scaling?

Horizontal scaling is a strategy used to enhance the performance of the dedicated server node by adding more instances of the server to your existing pool of servers so that the load can be equally distributed.

In horizontal scaling, we do not change the capacity of the individual server, but we decrease the load on the server. Horizontal scalability is achieved with the help of a distributed file system, clustering, and load – balancing.

Some of the reasons why businesses choose to scale horizontally include an increase in their I/O concurrency, need to reduce the load on existing nodes and to expand disk capacity. Horizontal-scaling is considerably easy as you can add more machines to the existing pool. It follows the partitioning of the data in which each node contains only one part of the data.

For example, let us consider that you have a business website. When there is growth in your business grows, there will be growth in your website traffic. This will increase the responsibility of your server and nodes. So in order to reduce this load, we can add one more server of the same capacity along with the existing server. Now with two servers, the traffic can be managed effectively.

The Internet has boosted the use of Horizontal Scaling. Many giant web service providers such as Google with its Gmail and YouTube, Yahoo, Facebook, eBay, Amazon, etc. are heavily utilizing horizontal scaling.

Horizontal scaling is also known as scaling out.

What is Vertical Scaling?

Vertical Scaling is an attempt to increase the capacity of a single machine. Here the resources such as processing power, storage, memory, and more are added to an existing work unit.

Vertical Scaling is done to increase the capacity of existing hardware or software by adding resources. It can enhance your server without manipulating your code. But it is limited by the fact that you can only get as big as the size of the server.

For example, let us consider that you have a business website. As your business grows, your website traffic will also increase. At times, with the increasing traffic, your server performance starts degrading. To manage the traffic load, your website needs to scale its resources by adding faster CPU Processors, RAM, disk capacity, etc. In such cases, you use a vertical scaling model that can enhance the capabilities of the same server and node.

Vertical Scaling boosts the power of the individual server to handle the increasing load. Adding more machines in vertical Scaling is often restricted to the capacity of a single machine. In vertical-scaling, there is no partitioning of the data. It all resides on a single node.

Vertical Scaling strategy is widely used in applications of small and mid-sized companies. One of the most common examples of Virtual Scaling is buying expensive hardware and using it as a Virtual Machine hyper-visor.

To summarize, I would say that it is essential for businesses to identify what suits their business requirements and understand the differences between these two scaling approaches to see if their application goals fit the chosen model.

If you need to accomplish superior performance, you can use either vertical scaling or horizontal scaling or both in a cloud environment. Many auto-scalable models are comparatively better than traditional scaling models and are well known for their performances without any downtime.

Don’t want to miss a thing from us? Subscribe to our blog now!

The Difference Between Horizontal vs Vertical Scaling